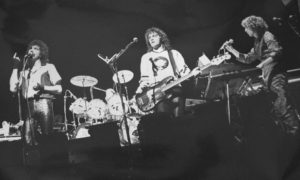 Their sonic trademarks — synthesizer harmonies, keyboard-guitar riffs, complex arrangements, and the charismatic vocals of frontman Michael Sadler — have made SAGA an influential prog rock band of the modern era.

In 2021, earMUSIC is celebrating the bands over four-decades long career with a carefully crafted reissue series, featuring the essential material from 1987 to 2007.

The albums will be heading back to stores on finest 180g black vinyl. All mastered for vinyl and reissued with enhanced artwork, rare fan material and press images, complemented extensive liner notes, and personal quotes by the band. Furthermore, a selection of the SAGA catalogue will also become available as digitally remastered, high quality CD Digipak Editions.

The SAGA reissue series continues on September 3rd, 2021, with the re-release of their 1987 studio album „Wildest Dreams“, which is perhaps the most accessible album of their career. After Jim Gilmour and Steve Negus had left the band a few years earlier, Michael Sadler and the two brothers Jim and Ian Crichton formed a power trio – the result of this development is closer to pop than its predecessors and knows how to convince with catchy melodies and strong elements of prog-rock. This raw diamond of 80s pop-rock will be re-released in a Deluxe CD Digipak Edition as well as on Black Heavyweight Vinyl with enhanced artwork and personal liner notes by Jim Crichton.

In addition to „Wildest Dreams“, SAGA’s 1989 album „The Beginner’s Guide To Throwing Shapes“ and their 1993 album „The Security Of Illusion“ will be re-released at the same time. Both also exquisitely mastered for vinyl in 2021.

„The Beginner’s Guide To Throwing Shapes” takes the direct route to progressive hard rock without losing the characteristic SAGA sound. It is one of only two albums SAGA produced as a trio.

Reissued as a Heavyweight Black Vinyl Gatefold Edition, this re-release features the acclaimed
1991 single „The Call“ as an exclusive vinyl bonus track as well as personal liner notes by Jim Crichton.

„Wildest Dreams“, „The Beginner’s Guide To Throwing Shapes” & „The Security of Illusion” are available for pre-order now:

The Security of Illusion: https://Saga.lnk.to/TheSecurityOfIllusion

Stay tuned and watch out for more SAGA reissues throughout the year.