While Dario Mollo is well known for his collaboration with Glenn Hughes (Voodoo Hill) and his three albums with Black Sabbath´s Tony Martin, you can claim that probably every rock fan has heard the biting and unique voice of Graham Bonnet before. The classic hit single “Since You Been Gone” (still played worldwide on the radio) from Ritchie Blackmore’s Rainbow album “Down To Earth” made the band which at the time also featured two current Deep Purple members: Roger Glover and Don Airey enjoy one of its biggest successes. Not to be forgotten, Bonnet´s work with the Michael Schenker Group or Alcatrazz, who launched the career of Steve Vai and Yngwie Malmsteen. 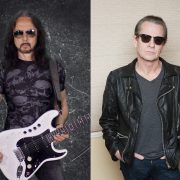