What was originally intended to be a solo project of Olaf Thorsen (Labyrinth‘s guitarist at that time) soon turned into a real band after having collaborated with singer Fabio Lione (known for his work in Rhapsody, Rhapsody Of Fire and most recently for having been the lead vocalist with Kamelot during their “Poetry For The Poisoned” tour, replacing with success the charismatic frontman Roy Khan). The band’s debut album “Vision Divine” (1999) immediately became a huge hit, selling over 100.000 units in Europe. Thanks to the success of the self-titled debut as well as their 2nd album “Send Me An Angel” (2001) Vision Divine has been the first Italian heavy metal band to headline sold-out concerts in Argentina, Chile, Brazil, Panama and Mexico. Right in the middle of writing their 3rd studio album, singer Fabio Lione was forced to leave the band due to contractual issues with Rhapsody and was replaced by talented and highly skilled Michele Luppi. With mastermind Timo Tolkki (ex Stratovarius) producing “The Perfect Machine” (2005) and “The 25th Hour” (2007), Vision Divine was able to further progress musically. 2008 marked the comeback of Fabio Lione after over 5 years and several changes within the line-up. The perfect line-up of the band was finally born and Vision Divine were ready to record and release their album “9 Degrees West Of The Moon” (2009). It was a long stony road and a hard time to become the band they are today but it was worth the fight. In 2012, with the concept album “Destination Set To Nowhere”, Vision Divine made clear that they were still going strong. And now, in 2017, the band is releasing their first best of collection! 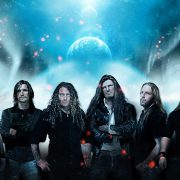 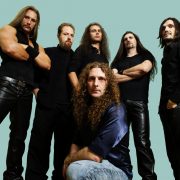