On March 19th, 2021, Lloyd Cole will re-issue his critically acclaimed studio album “Antidepressant”. Having been out of print since 2006, it is now available on vinyl for the first time ever and features an exclusive bonus track on both CD and Vinyl. “Antidepressant” is the first album in a series of carefully crafted re-issues to be released worldwide via earMUSIC. Following his latest studio album “Guesswork” in 2019. 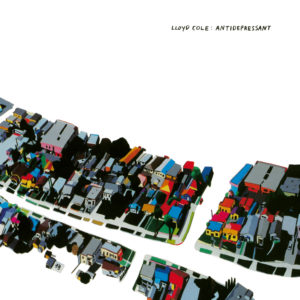 Despite having been recorded back in 2006, “Antidepressant” resonates deeply with the current worldwide situation. It is a vivid album, recorded entirely by Lloyd Cole himself, yet sounding like the production of a full band – a drastic change from the stripped-down experimental sound of its predecessor “Music In A Foreign Language”. Above all reigns Cole’s characteristic voice with his distinguished lyricism, ranging from the heartfelt to the sarcastic, which established him as one of the most articulate songwriters of the Post-Punk era. From the upbeat Rock of the title track to the Country-esque ‘Travelling Light’, “Antidepressant” is a confident album with an impressive range that effortlessly provides what its title promises.

“There isn’t a single song on it I regret recording and ‘The Young Idealists’, ‘Woman In A Bar’ and ‘Rolodex Incident’ can stand shoulder to shoulder with my very best, I think. I never tire of singing the first two and I wish I could figure out a way to perform Rolodex…”, says Cole. “There was only one completed outtake from the recording sessions – ‘Coattails’. This track has aged well and I should probably have figured out a way to include it in the original running order but I didn’t. So we’ve included it as an extra track at the end of the CD and as a bonus 7” Single with the album.”

On March 19th, 2021, “Antidepressant” will be available again on CD Digipak and for the first ime ever as Vinyl LP, in a beautiful gatefold edition including a 7” Single featuring the previously unreleased song ‘Coattails’ from the original album recordings.