“Live In Hamburg” is the first solo live album by the keyboard virtuoso Don Airey, known as a member of Deep Purple – out on February 26th. 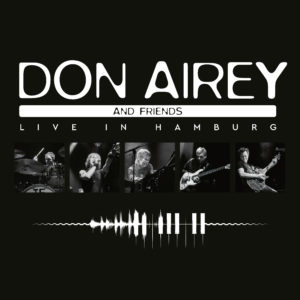 Touring with the great and the good for decades, Don Airey has never been on the road with his own solo project. This changed when he first toured Germany in 2017 as “Don Airey & Friends”. His Friends – of course, all true professionals in their own right – are lead singer Carl Sentance (Nazareth), ex-Black Sabbath bassist Laurence Cottle, guitarist Simon McBride (Sweet Savage) and drummer Jon Finnigan (Gang of Four).

Being one of the most recorded keyboardists of all time, with over 300 albums in which he has participated, the setlist in Hamburg’s famous Fabrik included top-class hits and all-time favorites from his career such as ‘Since You’ve Been Gone’ by Rainbow, ‘Still Got The Blues’ by Gary Moore or Deep Purple’s ‘Child In Time’ (which Deep Purple isn’t performing live anymore). Available as high-quality 2CD Digipak edition Don Airey’s “Live In Hamburg” must not be missing in any music collection when it releases on February 26th, 2021.